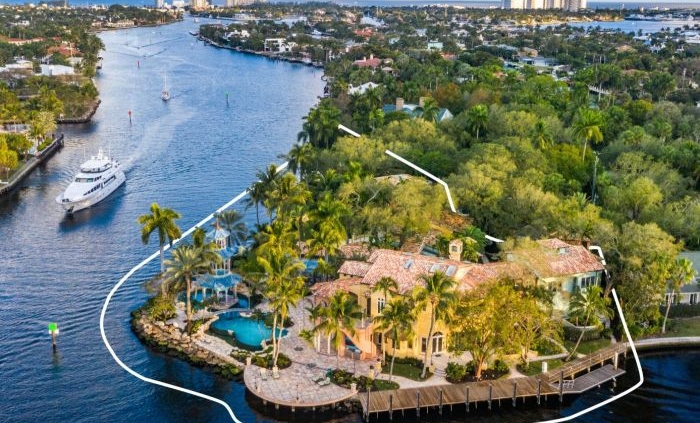 Before watching movies at home was as easy as the click of a mouse, renting videos was an event that required a car trip to a video rental store where one would peruse the titles and finally choose several to stock up for the weekend’s entertainment. The video rental had a time limit and inconveniently had to be returned by the date provided or the user would pay a late fee. Entrepreneur H. Wayne Huizenga identified the folly the meager offerings of local stores provided so he bought into, co-owned and developed Blockbuster, which changed and soon dominated the video rental playing field. No one else could compete with Blockbuster’s massive selection and it stayed well in the forefront of the video rental industry until the digital age. Among Huizenga’s myriad of other business holdings, Huizenga’s net worth at his time of death in 2018 was well over $2 billion. The waterfront mansion he chose to live in was in the boating capital of the world, Ft. Lauderdale, Florida surrounded by water on three sides. Named Tarpon Pointe and previously priced at $27 million, it will be going to auction on March 26th with no reserve. Slow down for the wild peacocks as you head toward the stunning entrance in the high-end Rio Vista neighborhood. Sited on over an acre at the tip of a point about one mile to Fort Lauderdale’s oceanfront condos and best beaches, the grounds are surrounded on three sides by 600 feet of waterfront, which is perfect not only for tying up one’s mega yacht, but for watching the New River boat traffic, waterfowl, manatees and tarpons. With an overall 20,623 square feet of living space, the home has 10 bedrooms, 18 baths and is thoughtfully divided into three living zones for optimum comfort for family and guests alike. A structure of massive size, the central portion is designed to entertain large groups without disturbing others in the family wing or guest wing. The family wing includes offices, bedrooms, private kitchen and family room. The guest wing also includes the staff quarters. Spectacular river and terrace-pool views are enjoyed throughout the house. On the cutting edge of technology, there is an electronic locking system, state-of-the-art security system for doors, hurricane protected windows, emergency generators, an elevator and dock facilities. H. Wayne was the only person to launch three Fortune 500 companies: Waste Management, Blockbuster Entertainment and AutoNation. A huge sports fan, Huizenga was also owner or part owner of the Florida Marlins, Florida Panthers and the Miami Dolphins. At its peak in the early 2000s, there were over 4,500 Blockbuster stores in the U.S., now just one is left which is in Bend, Oregon. Huizenga passed away at the age of 80 in March 2018. His home has become a landmark to Lauderdale’s prolific boating community and tour boats. The palatial estate of Blockbuster Video creator, H. Wayne Huizenga, on the historic New River in Ft. Lauderdale, previously on the market priced at $27 million, is now going up for auction. Bidding opens on March 26th with no reserve.